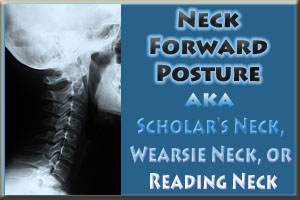 The human body is a finely-tuned work of engineering. Throw something out of balance and the body fights to restore that balance. At the same time, the body is also flexible. It adapts to its environment and changes in response to the different types of repetitive stresses placed on it from day to day. That’s why your cardiovascular system becomes more efficient as you walk, run, swim or bike regularly. It’s also why your muscles gain size and endurance from certain types of workouts.

However, sometimes it is possible for the body to adapt—or to be reshaped—in ways that are unhelpful or even harmful as a result of unusual stress or posture repeated over a long enough period of time. The body finds ways to compensate and creates a “new normal”.

This condition can sometimes be brought on simply by bad habits with posture. It can even be a result of emotional conditions such as depression where a person does not feel like holding their head up high. Sometimes, the condition can be the result of whiplash as in a car accident. An abrupt stop or collision during a traffic accident can force the neck to lose its natural curvature and become straight, forcing the head to remain forward just as it was during the accident. A 2012 study published by the National Institutes of Health (NIH) found that heavy computer users also tend to have head forward posture.

Head forward posture can result in headaches. In fact, most neck pain not resulting from whiplash will find poor posture at least partially responsible. Left untreated, this condition can worsen for obvious reasons. For every inch of forward movement, the head exerts an additional 10 pounds of force on the back muscles. This constant force moves the head forward even farther as the back muscles struggle to hold onto the head.

Abnormal leverage from this condition can knock the spine out of alignment, creating further complications. Patients with head forward posture have also been known to suffer a 30% loss in vital lung capacity.

If this condition persists in the long term (“hyperkyphotic posture”), it can result in what’s known as “Dowager’s Hump,” which can sometimes be debilitating. Also, one study found that hyperkyphotic posture (persistent head forward posture) can increase the rate of mortality by a factor of up to 1.44 times normal.

Treatments of head forward posture tend to be conservative. Chiropractic adjustments can help the head to remain over the shoulders. Not only will these fix the misalignment of the spine resulting from head forward posture, but the adjustments will reinvigorate the muscles which retract the head, allowing a reversal of the condition. There are also several exercises that your chiropractor can recommend to strengthen the muscles that retract the head.