Exercise as Medicine: Spotlight on Walking 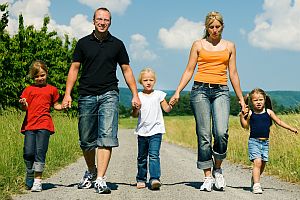 Do you want to become healthier and stay healthy longer? Take a walk. That is the message of two important new studies.

In the first, from Tel Aviv University in Israel, researchers found that a simple aerobic program based on walking was as effective in alleviating lower back pain as muscle-strengthening programs that required specialized rehabilitation equipment. The researchers recruited 52 patients with chronic lower back pain, and assigned half of them to complete a six-week, clinic-based muscle-strengthening program, exercising under supervision two to three times a week. The other half of the patients spent the six weeks of the study walking for 20-40 minutes two to three times a week.

According to study leader Dr. Michal Katz-Leurer, in research published in the journal Circulation, the walking program was “as effective as treatment that could have been received in the clinic.” He explained that when people walk, their abdominal and back muscles are forced to work in a similar way as when they complete rehabilitation exercises targeting those areas. And unlike rehabilitation, which requires specialized equipment and expert supervision, walking is an activity that can be performed alone, and easily fit into a person’s schedule.

In the second study, researchers from Brigham and Women’s Hospital in Boston analyzed data collected on the activity and sitting habits of 36,000 older men, over a period of 24 years. The researchers determined how much time the men spent sitting, performing other activities, and walking, and whether they walked at an easy, average, or brisk pace. What they found was that even a little walking each week significantly lowered the risk of hip fractures in men over 50.

Over the period of the study, which was published in in the American Journal of Public Health, 546 hip fractures occurred, 85% of which were from “low trauma” events such as slipping, tripping, or falling from a chair. The study data indicates that the more the men walked, and the more vigorously they walked, the lower their risk of hip fracture was as they aged. Walking over four hours per week was identified as the point at which the most significant benefits occurred, providing a 43% lower hip fracture risk than in men who walked only one hour a week.

Study author Diane Feskanich says about her findings, “It’s well known that physical activity helps to prevent hip fractures, that it helps to build bone and muscle tone. It can help with balance, too. One thing we’re pointing out here is that it doesn’t necessarily have to be strenuous activity. A lot of studies have focused on the benefits of strenuous activity, but we found walking alone helped to prevent hip fractures, and when you come down to it, older people are often more comfortable with walking.”