Eat Your Tomatoes to Enjoy the Health Benefits of Lycopene 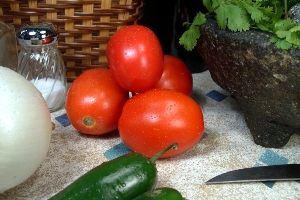 The substance responsible for giving deep red fruits and vegetables their color is a carotenoid called lycopene.  Like other carotenoids, it is an antioxidant that works to destroy cell-damaging free radicals.  However, it is better than other carotenoids in maintaining the integrity of our cell membranes, making them more effective in allowing nutrients to enter, removing waste and preventing the invasion of bacteria and toxins.  This means they can play a greater role in reducing the risk of disease.  Of all the red fruits and vegetables, tomatoes are the number one source of lycopene, particularly if they have been processed.

Researchers say they are discovering more health benefits to lycopene all the time.  It has long been known to protect against heart disease and cancer, particularly cancer of the prostate.  A Harvard study found that men who ate foods containing cooked tomatoes (such as tomato sauce) twice a week or more had a 20% lower risk of developing prostate cancer.

Furthermore, during a recent conference at Virginia Technical Institute that was sponsored by the Center for Food and Nutrition Policy, scientists reported that lycopene can protect against the sun’s damaging UV rays—the ones that promote skin cancer.  Experts note that, while sunscreens work on the outside to keep skin from being damaged, lycopene protects skin from the inside.  Only one cup of tomatoes per day is needed to reduce sun damage by up to 35%.

Scientists have discovered the mechanism by which lycopene interferes in the development of cancer—it keeps cancer cells from connecting to a blood supply.  Lycopene appears to keep cancer cells from linking to the endothelial cells that are necessary to create blood vessels through which it can feed itself.

Lycopene’s usefulness in helping to prevent bone loss is also impressive.  Our bones are always in a process of breaking down and re-forming, but with the help of lycopene, the rate of bone formation exceeds that of bone loss, reducing the risk of osteoporosis.

To get the greatest benefit from the lycopene in tomatoes, be sure to eat tomatoes that have been cooked or processed.  Tomatoes that have been canned, frozen, cooked in sauce or turned into a juice are great examples.  Cooking breaks down the tomato’s cell walls, releasing more lycopene than is available when the tomato is eaten raw.  In addition, tomato products should be eaten with a little fat (such as olive oil) since lycopene is fat-soluble and absorption is improved in the presence of some fat.

Tomatoes are high in vitamin C, another potent antioxidant, and contain folate, niacin and vitamin B6, which contribute to lowering the risk of heart disease.  And drinking a glass of tomato juice every day has been shown to reduce levels of a substance called TNF-alpha by up to 34%.  TNF-alpha is a cytokine that causes inflammation, which is linked to a number of chronic diseases such as cancer, osteoporosis and heart disease.

Although watermelon and pink grapefruit also contain some lycopene, the amount in tomatoes exceeds those by more than tenfold.  So eat more tomatoes and enjoy the benefits of better health!