Does it Matter Where I Get My Probiotics? Aren’t They All the Same? 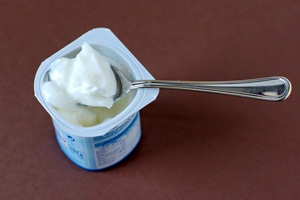 Our intestines contain over 400 species of microorganism that help with the digestive process and prevent the growth of harmful pathogens in the bowel. Keeping our internal ecology in order is therefore very important, but a number of factors can upset the balance of organisms such as unhealthy eating, age, illness and certain medications.

Probiotics (also known as good or friendly bacteria) are live microorganisms that are similar to those found in the digestive tract. Examples include bacteria from the genus Lactobacillus (such as L. acidophilus and L. casei) and Bifidobacterium (e.g. B. infantalis and B. animalis). Ingesting probiotics in live yogurt (yogurt containing good bacteria) or as a dietary supplement is commonly thought to have a beneficial effect on the intestines by maintaining a healthy balance of gut bacteria.  Advertising reinforces this idea.

Probiotic supplements from a number of different manufacturers can be found in most health food stores at a variety of prices. The question is, do some of these work better than others or should we just buy the cheapest brand and be done with it? Are they effective at all? On the other hand, might it be better to consume probiotics in another form altogether, such as live yogurt or probiotic fruit juice? Probiotics also occur naturally in other foods such as miso, kefir and fermented soy products.  What’s the truth?

Let’s start with yogurt. It has been suggested that live yogurt is actually a very ineffective source of probiotics, as the presence of micro-organisms is at a relatively low dose and they have no protection to ensure that they survive the less than friendly stomach acids to actually make it as far as the bowel. The effect of other natural probiotic foods is thought to be similarly minimal in impact.

Given that the gut contains over 100 trillion microorganisms, it needs a pretty large number of probiotic microbes to have any effect at all on the internal ecology of the bowel. For this reason, low-strength probiotic supplements containing less than 10 million CFU (colony forming units) of bacteria are thought to be just as unhelpful as yogurt or other natural foods, unless the supplement is either enterically coated or contains acid-resistant bacteria, both of which help survival in the stomach.

The CFU number of a probiotic supplement is a good general guide as to how effective it might be, but other factors are also important. A single-strain supplement (containing just a single probiotic species) will not be able to work anywhere near as effectively as one containing multiple strains of good bacteria.

However, it is not necessarily the case that a supplement containing more strains will be better than one containing fewer, since each additional strain is present in proportionally lower numbers. Recent studies suggest that between three and seven strains are optimal for effectiveness, and any species present in numbers fewer than 2 million CFU are pretty much a waste of space. In addition, some species of good bacteria are themselves ineffective. Strains from the genus Lactobacillus and Bifidobacterium are thought to be the most reliable. Some strains of Saccharmyces , such as S. boulardi,  may also be effective.

In addition to buying a quality supplement in the first place, there are some other things you can do to improve the effectiveness of your probiotic. First, always keep your probiotics in the refrigerator. Second, consume foods known as prebiotics that improve the growth of good bacteria. Prebiotics include the amino acids lysine and methionine, which are found in proteins such as whey and fish, and galactose, which is a constituent of dairy products and sugar beets.