Diet and the Hyperactive Child 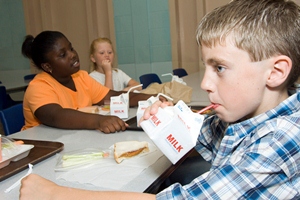 Having a child with Attention Deficit Hyperactivity Disorder (ADHD) can be a challenging—and sometimes heartbreaking—experience, and it’s one that affects many families.  According to the Centers for Disease Control and Prevention, 4.7 million children in America have been diagnosed with the condition.  Approximately 9.5% of children between ages 4 and 17 have at some point in their lives been diagnosed with ADHD, which has increased 5.5% on average each year between 2003 and 2007.

Why the sudden upsurge in the prevalence of ADHD?  A few years ago, a number of studies found a strong association between ADHD and diet, and there was a strong push to try treating ADHD with diet modification.  This approach has met with very mixed results.  In the end, no conclusive evidence was found of a direct cause-and-effect link between specific dietary factors and ADHD.  As a result of the contradictory and inconclusive data, diet modification lost a lot of its support within the medical community as a possible treatment.  However, that started to change with the 2007 publication of a seminal British study now commonly referred to as the “Southampton Study”.

In the Southampton Study, a drink containing a mixture of artificial food coloring and the preservative sodium benzoate was found to aggravate hyperactivity in three-year-olds and did the same thing to a lesser extent in eight- to nine-year-olds.  A 2010 study published in The American Journal of Psychiatry found similar results, and suggested that children made more hyperactive by food additives were likely to have problems with the genes that regulate histamine release (in response to potential allergens).  In February 2011, another follow-up study was published in the prestigious journal The Lancet, which found that nearly two-thirds of the children who were following an elimination diet (in which food additives were eliminated in favor of fresh grains, meats, vegetables, and fruit) experienced significant reduction of their symptoms of hyperactivity and defiant behavior.

This research was strong enough to restart discussions about the possible role of food additives in causing or aggravating ADHD, and has led to the British government requesting that manufacturers remove most food dyes from their products.  The European Union now requires warning labels on products that contain any of six food dyes that “may have an adverse effect on activity and attention in children.”

There has been a recent resurgence in interest in “elimination diets” as a possible approach to treating ADHD.  Even though they may not work for all children with ADHD, they may work in a significant enough percentage of cases to warrant their use.  Basically, such a diet consists of eating more protein (meat, eggs, cheese, nuts, etc.), eating fewer simple carbohydrates (candies, corn syrup, breads made from white flour, etc.) and eating more complex carbohydrates (whole grains, fresh vegetables and fruits).  Proponents of such diets also recommend taking supplements of omega-3 fatty acids (fish oil) and a general vitamin supplement.

The real “elimination” part of the diet involves trying to remove from it ingredients or food additives suspected of causing or aggravating ADHD to see if not eating them results in fewer symptoms.  These additives include sodium benzoate and food dyes Yellow Nos. 5, 6 and 10, Red Nos. 3 and 40, and Blue Nos. 1 and 2.

Naturally, if your child has been diagnosed with ADHD, consult with a qualified physician before trying any type of elimination diet.  He or she may be able to perform tests to help determine which dietary changes might be the most beneficial.