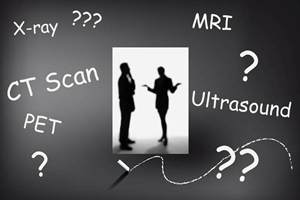 Next year celebrates the 100th anniversary of the first medical use of X-rays.  In the century since William Coolidge first designed an X-ray tube for medical purposes, the science and art of imaging has made quantum leaps.  Physicians and their patients now have an alphabet soup of options to choose from when it comes to diagnostic imagery that can help them visualize the body’s internal anatomy without invasive exploratory surgeries.

Modern day X-ray devices still follow the same scientific principles as the first X-ray machines but implement a broad range of safety features to protect patients from the harmful effects of radiation exposure.  X-rays are electromagnetic radiation waves that are absorbed or deflected by materials at different rates.  Human tissue allows most of the rays to pass through, whereas bone and other more solid parts of the anatomy absorb or deflect significantly more rays.  This allows an X-ray-sensitive film or detector placed on the opposite side of the body to produce a high-quality monochrome image of the interior of the body.  Due to the damaging effects of X-rays, an X-ray picture is a single instant exposure and therefore captures static images of the interior.

Computed Axial Tomography (CAT or simply CT) expands upon the principle of regular X-ray machines by moving the X-ray beam around the patient, thereby scanning the body from numerous angles. A computer then constructs a 3-D image from the resulting scans.

Ultrasound devices apply a somewhat similar procedure but use far safer sound waves.  With the transmitter and detector built into the same, easy-to-handle wand, it allows for real-time views of the body’s interior that can be adjusted and redirected as needed.  Ultrasound devices deliver safe, high-frequency sound (i.e., ultrasound) waves that bounce off the target as they encounter changes in density.  These waves are picked up by the detector and are converted into images by the computer.

Magnetic resonance imaging (MRI) employs a complex combination of extremely powerful magnets and radio frequencies.  These create resonances in the atoms that make up the tissues being examined to produce a highly detailed, slice-by-slice series of images of the inner body.  Injectable contrast medium is often used to enhance certain areas of interest.  Although there are currently no known side-effects of exposure to high-intensity magnetic fields and few from the injectable contrast medium, the powerful magnetic fields require strict precautions due to the danger posed by metal objects within or around the patient as they are being scanned.  If these objects are magnetic, they will tear loose and may injure the patient.

Positron Emission Tomography (PET) scanners create images by detecting the radiation given off by substances containing radioactive particles that are injected into patients just before scanning.  PET scanners have a donut-shaped housing that contains a circular gamma ray detector that is attached to a computer.  The detector picks up the radiation as the patient is moved through the housing on a table, and the computer translates the data into slice-by-slice images of the areas containing the radioactive substance.

These imaging devices have helped to remove much of the uncertainty from the diagnosis and treatment of internal injuries and conditions.  When used appropriately, imaging analysis can significantly improve a patient’s chances of survival and reduce the cost of treatment.