Dehydration Nation? How Much Water Do We Really Need? 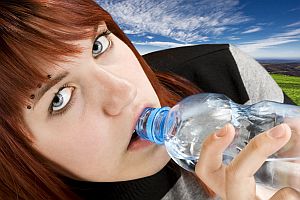 Americans drink over 9 billion gallons of bottled water each year, up from 5 billion in 2001. However, most Americans still believe that they go through life chronically dehydrated. At least, that is what we have been led to believe by certain experts and bottled water companies who have suggested that everyone drink eight glasses of water a day for the sake of their health. However, that advice has no basis in scientific evidence, according to Scottish physician Dr. Margaret McCartney, who says that the need to drink that much water to prevent dehydration is “not only nonsense, but is thoroughly debunked nonsense.”

It is easy to find articles all over the Internet on the health benefits of drinking more water. From better skin to weight loss, all manner of health improvements have been attributed to drinking eight glasses of water a day. But according to Dr. Stanley Goldfarb, a nephrologist at the University of Pennsylvania Perelman School of Medicine, who looked for evidence to support these health claims, “We found that there really is no evidence that drinking more water makes you perform better. It doesn’t reduce appetite, it doesn’t lead to long-term weight loss, and it can’t possibly improve your complexion. It won’t clear your body of toxins or reduce headaches.”

The idea that if you are thirsty then you are already dehydrated has no basis in fact. The human body is well designed to manage its water needs, and if you drink when you are thirsty, then you are likely getting enough fluids. Goldfarb notes, “Thirst is a highly developed sensation, powerfully motivated. When you’re thirsty, all you want to do is drink. But being thirsty doesn’t mean you are ill at this point or dehydrated to the point that there are consequences.”

Another myth is that coffee, tea and soft drinks cannot be counted in the amount of fluids you take in each day. We get thirst-satiating fluids not only from these beverages, but also from other things we eat, such as fruits and vegetables, many of which have a relatively high water content. Excess caffeine and sugar intake from various beverages can affect health negatively, which is why physicians do not advise these in place of water, but they do contribute to the amount of fluids you get each day.

Those who should be more concerned about drinking sufficient amounts of water are athletes and those who work at jobs that require a lot of physical activity, as water is lost through sweating. But the average person who sits at a desk most of the day and commutes by car to and from work is not at high risk of dehydration. All you need to do is to drink water when you are thirsty (and tap water is just as good, despite what the bottled water companies will tell you).