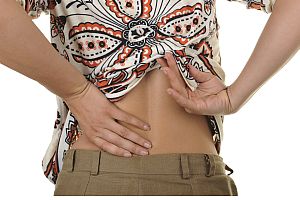 As unfortunate as it is, loss of normal spinal curvature and poor posture are extremely common. Given the amount of time we spend staring at various screens—whether sitting at an office desk or walking down the street—it’s not surprising that our bodies are being affected. It’s also not surprising that back and neck pain has become the second most frequent reason for visiting a doctor.

Many people presenting with back and neck pain also suffer from a loss of normal spinal curvature. Luckily, there are a number of treatment options that can be used to restore the normal curve and to help patients relearn good posture. Broadly speaking, loss of the normal curve most commonly involves one of three conditions: lumbar hyperlordosis, scoliosis, and abnormal kyphosis. Each has a number of curve rehabilitation techniques associated with it.

Patients with lumbar hyperlordosis (also known as “swayback” or “saddle back”) have developed an exaggerated arch in the lower back (the lumbar region of the spine) that typically makes the buttocks and belly appear more prominent. The treatment approach will often depend on the severity of the abnormal curve and the amount of mobility that still exists in this area of spine. If the curve is not flexible, then it is more likely that treatment will be necessary.

Since hyperlordosis places unusual stress on the vertebrae and spinal discs, failing to seek treatment increases the risk of accelerated spinal degeneration, disc herniation and other structural problems. These, in turn, can cause pain and limit function. Over time, other areas of the body—including the hips, legs and internal organs—may also be affected.

Chiropractors are experts in diagnosing and treating a wide range of musculoskeletal conditions that affect the back and neck. Depending on the situation, they may use a combination of chiropractic adjustments, spinal molding blocks and foam rolls to restore the normal curve. They will also work closely with patients to make postural adjustments, strengthen core muscles and increase range of motion. When a child has hyperlordosis, treatment may involve a brace, which helps to ensure that the abnormal curve doesn’t worsen as he or she grows.

For the most severe and painful cases of hyperlordosis, surgery may be necessary. The objective of this surgery is to correct the severity of the curve and provide additional support for the body’s frame. Such surgery may involve metal rods, hooks, or screws. Surgeons may also use a bone graft to stimulate new growth and strength.

The word “scoliosis” is more widely recognized than hyperlordosis among the general public. It refers to an abnormal c- or s-shaped lateral curvature of the spine—one that is apparent while looking at an individual from the front or back. In some cases, a patient’s head may appear off-center or one shoulder or hip may be higher than the other.

In about 80% of cases, the cause of scoliosis is not known. This is generally referred to as “idiopathic”. Scoliosis may also be “functional” (an abnormal curve develops because of a problem elsewhere in the body), “neuromuscular” (a curve is caused by abnormally formed vertebrae) or “degenerative” (the curve is the result of deterioration, damage or weakness in the spine’s supporting structures—bone or soft tissue—during later years).

Treatment options for scoliosis depend on the severity and location of the curve, its cause and the likelihood of it getting worse as the patient gets older. Treatment typically involves braces for children and adolescents if their spinal curves are between 25 and 40 degrees. However, the brace’s straightening effect only lasts as long as the patient wears it. Those with a curve beyond 40 degrees to 50 degrees are often candidates for scoliosis surgery. As WebMD puts it, “The goal is to make sure the curve does not get worse, but surgery does not perfectly straighten the spine. During the procedure, metallic implants are utilized to correct some of the curvature and hold it in the correct position until a bone graft, placed at the time of surgery, consolidates and creates a rigid fusion in the area of the curve. Scoliosis surgery usually involves joining the vertebrae together permanently—called spinal fusion.”

Abnormal kyphosis is an outward curvature of the thoracic spine (middle back) that results in a “hunched forward” or “hunchbacked” appearance. It is often caused by poor posture. In these cases—referred to as “postural kyphosis—a chiropractor can reduce the hump by prescribing lifestyle changes and strengthening exercises that improve posture. He or she may also use a variety of spinal adjustment techniques to reduce pain and inflammation, calm muscle spasms, restore range of motion and slow the rate of disc degeneration in the middle back.