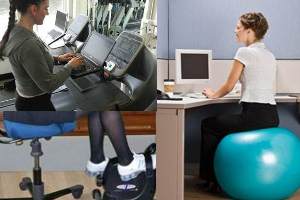 The health hazards inherent in sitting for hours at a time are becoming increasingly well documented, even if those hours are sandwiched between bouts of serious exercise. Long time periods spent sitting increase your risk of chronic neck and back pain, obesity, type 2 diabetes and heart disease. Two recent studies published in The British Journal of Sports Medicine showed that the more time subjects spent sitting, the shorter their lifespan, regardless of if they exercised regularly. So what is an office worker who is required to spend hours at a desk to do? One option that has been gaining some followers is to use “active workstations.”

Mayo Clinic researcher Dr. James A. Levine has been studying the effects of inactivity for 15 years, beginning at a time when this area of research was something of a novelty. “But it’s totally mainstream now. There’s been an explosion of research in this area, because the health care cost implications are so enormous,” Levine says.

Active workstations allow you to stand and sometimes even walk while working at your computer. Another popular item is the inflatable “stability ball,” which is similar to an exercise ball. When the user sits on it, the effort to remain upright and stable on the ball theoretically keeps the muscles of the back and abdomen more active than when sitting in a chair.

There is now more demand for workstations that adjust to accommodate the worker either sitting or standing. Some have even been developed with a treadmill so you can walk while writing the annual report. There has been a fivefold increase in sales over the past five years in adjustable desks and treadmill desks, according to manufacturer Steelcase, which caters to the high end of the workstation market.

While active workstations may help to get you moving, they have their downsides as well. One is the increased levels of inaccuracy that show up in the work you are doing. Eleven medical transcriptionists were observed during a 2011 Mayo Clinic study to determine the benefits of active workstations. The researchers found that accuracy and typing speed were 16% lower when walking than when sitting. Another study performed by researchers at the University of Tennessee found that cognitive function such as problem solving and fine motor skills such as dragging and dropping and clicking with a computer mouse deteriorated by 11% while walking on a treadmill. And of workers who stand all day, 83% have a greater risk of chronic vein problems.

Here’s the good news.  You don’t need an active workstation to reduce the number of hours of continual sitting you do. It’s relatively easy to incorporate more movement into your everyday work activities. For example, put your wastebasket on the opposite side of the room, use a cordless phone so you can walk around while talking, walk over to a colleague’s desk instead of calling them on the phone or sending an e-mail, or even just do a few stretches at your desk. This will increase the benefits you get from movement without the downsides of using an active workstation.