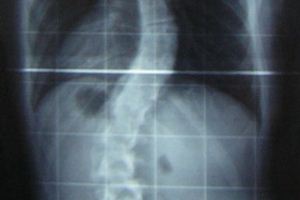 Scoliosis is a condition in which the spinal column appears curved rather than straight when viewed from the back. Symptoms include pain, restricted upper body movement and, in more severe cases, increased pressure on the heart and lungs. The misalignment of the vertebrae that is associated with scoliosis tends to worsen with age due to an asymmetric degeneration of the spine that is produced by the abnormal curvature.  This means that effective early management of the condition is important. As yet, however, there have been few published studies of exercise and rehabilitation programs specifically designed to help patients with scoliosis.

Michigan chiropractor Mark Morningstar assessed the progress of 28 patients after chiropractic treatment for scoliosis and a six-month follow-up program of remedial exercise and rehabilitation techniques. The specific therapeutic interventions used by each patient at home were based on Active Reflex Correction in 3 Dimensions (ARC3D) and included the use of corrective weights, exercises that rotate the upper body, and foam blocks to bring the spine back into alignment.

Six months after the initial treatment, patients exhibited an average improvement of 10 degrees in spinal curvature from a mean curvature of 44 degrees prior to treatment. Twenty-two of the 28 participants in the study were observed to have improved spinal alignment, with the remaining six receiving no apparent benefit. Without treatment, the angle of curvature would be expected to remain broadly similar, as it did in the six unimproved patients, or even to increase. Patient ratings of pain were recorded to have fallen by an average of 39 percent based on the Quadruple Numeric Pain Scale (QNPS) questionnaire when measured at six months after initial treatment, and by a further 21 percent at the 24-month follow-up. The Functional Rating Index (FRI) of disability similarly fell from a baseline average of 60 percent to 30 percent at the six-month check, and 18 percent at 24 months. A spirometer was used to measure the lung capacity of all patients before and after treatment, and a 7percent mean increase was observed at six months, with no further improvement 18 months later.

Improvements in curvature, pain and disability tended to be greatest in patients who began the study with the least severe condition. Patients presenting with double major curvature (an S rather than C-shaped spine) received no benefit in spinal curvature from the treatment, but even they experienced a reduction in pain and disability.