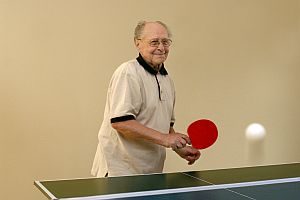 Elbow pain, whether caused by injury or repetitive stress (as in the case of “tennis elbow,” aka lateral epicondylosis), is so common that it accounts for a large percentage of sports-related injuries. 40% of tennis players suffer from tennis elbow at some point in their lives. However, elbow pain is not limited to tennis players. In fact, 30% of laborers, such as thoseoffice employees and construction workers who perform repetitive handwork, also suffer from tennis elbow. Medical doctors consider the condition so difficult to treat that the expected duration of a case of tennis elbow ranges from 6 to 48 months—and many of those who suffer from this malady find the pain to be anywhere from simply irritating to nearly unbearable.

Fortunately, there are a number of case studies indicating that fast relief from elbow pain, caused either by injury or tennis elbow, can be effectively treated more quickly using chiropractic techniques. The most recent case study, published in the Journal of the Canadian Chiropractic Association, followed the progress of a 41-year-old man who had fallen during a game of basketball, injuring his left elbow. The man experienced pain that was intense enough that he could not play sports or perform normal activities that involved his left elbow for over five weeks after the fall..

A physical examination of the patient revealed that he showed signs of tendon injury in the elbow as well as dysfunctional segments in his thoracic spine (i.e., the mid-back) area. He was treated with multimodal chiropractic care that included high-velocity, low-amplitude spinal manipulations as well as acupuncture and the Active Release Technique® (aka ART®, a specialized massage technique), applied directly to the affected elbow.

One week after receiving these treatments, the patient reported that most of his symptoms had been resolved. His subjective pain levels dropped from a 5 to a 1 on a scale of 1 to 10, and he could engage in recreational activities again with minimal pain. In a follow-up report six months after treatment, he reported no adverse effects and a complete resolution of symptoms. This led the researchers to report, “A combination of acupuncture, ART® and spinal manipulation seemed to have been effective at resolving the patient’s complaints and allowing him to return to normal activities.”

This case study supports the findings of a previous Journal of the Canadian Chiropractic Association case study from 2006, which reported that ART® had been effective in the treatment of tennis elbow. This is also good news for those suffering from elbow pain, for recent presentations at a focused symposium on tennis elbow reported that one of the treatments commonly employed by medical doctors—corticosteroid injections—actually make the condition worse six to eight weeks after getting the injections.

So if you suffer from elbow pain, contact your chiropractor and ask about the combination of spinal manipulation, acupuncture, and ART®. It may be incredibly effective at relieving your pain and getting you back into the swing of things (whether or not you play tennis).