Can Your Genes Make it Easier to Quit Smoking? 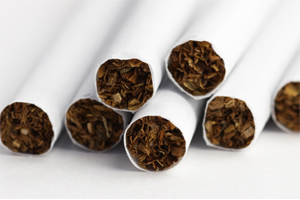 Tobacco use is the foremost cause of death and preventable illness in the country. There are approximately 443,000 deaths each year in the US alone that are related to cigarette smoking. Yet we all know how difficult it is to quit. There are a wide array of smoking cessation aids, including motivational tapes, hypnosis and acupuncture, and a host of drugs and nicotine-based aids such as patches, inhalers, gums, lozenges and nasal sprays.

Interestingly, a new study has found that those whose genes predispose them to become heavy smokers with a high risk of strong nicotine addiction are also the most likely to respond to drugs and nicotine replacement therapy in their quest to quit.

The study, published in the American Journal of Psychiatry and conducted by researchers at the Washington University School of Medicine in St. Louis found that those with a specific variant in the nicotine receptor gene were three times as likely to respond to drug therapies such as buproprion than those who did not carry this variant.

Researchers analyzed the data from over 6,000 smokers to assess the relationship between their ability to quit smoking and their genetic makeup. According to Li-Shiun Chen, MD, assistant professor of psychiatry at Washington University, those who had the high-risk genetic markers smoked two years longer on average than those who did not have the marker, and they were less likely to be able to quit without the assistance of medication.

According to Dr. Laura Jean Bierut, professor of psychiatry who was one of the lead researchers, “smokers whose genetic makeup puts them at the greatest risk for heavy smoking, nicotine addiction and problems kicking the habit also appear to be the same people who respond most robustly to pharmacologic therapy for smoking cessation. Our research suggests that a person’s genetic makeup can help us better predict who is most likely to respond to drug therapy so we can make sure those individuals are treated with medication in addition to counseling or other interventions.”

The study’s researchers believe this may lead to future tests that can help to tailor a suitable smoking cessation program for each individual that will ensure the greatest likelihood of success. Those smokers who do not carry the genetic variant will likely find that drugs and nicotine replacement therapy will not work as well as non-pharmacological treatments. Hypnosis, acupuncture, behavioral therapy and different motivational therapies have helped many to overcome their smoking addiction. And with the addition of this recent research, one of these therapies is likely to help you kick the habit for good.