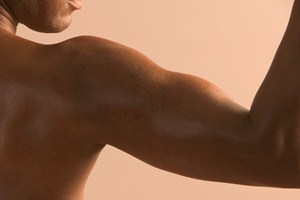 The aches and pains of biceps tendonitis can seriously interfere with your daily activities. It is often surprising to people to realize just how much they use their biceps in the course of a day, whether they’re picking up a bag of groceries or just brushing their teeth.

The biceps brachii muscle originates on the scapula (shoulder blade) and crosses both the shoulder and elbow joints, eventually attaching to the upper forearm. Its main function is the flexion and supination (twisting the palm to the front) of the forearm, but it also helps lift the shoulder. Weight trainers will be very familiar with the bicep curl, in which the muscle is strengthened through repeated lifting of a weight in the hand through alternately flexing and extending at the elbow.

Repeated overuse of the biceps muscle can lead to inflammation of the tendon, causing tendonitis. People who practice sports with repetitive ‘overhead’ actions such as tennis, baseball and javelin throwing are at greater risk for the development of tendonitis, as are those with any kind of job or activity that involves similar repetitive movements of the shoulder. Bicep tendonitis may also often occur in combination with other shoulder problems such as rotator cuff tears, arthritis of the shoulder, shoulder instability, tears of the glenoid labrum and shoulder impingement (inflammation of the rotator cuff).

Patients with biceps tendonitis usually report feeling pain in the front of the shoulder and sometimes in the biceps muscle itself. This is made worse through overhead motion and improved by resting the arm and shoulder. The arm may feel weak when bending the elbow or turning the palm upwards. If you experience any of these symptoms, it would be wise to visit your doctor or chiropractor.

Biceps tendonitis is a common condition seen by chiropractors, and your practitioner will want to make a thorough examination of you and your medical history in order to determine whether your condition is tendonitis or some other condition, and if there are any co-occurring injuries. X-rays are rarely used initially, but may be called for later if the shoulder is not responding to treatment.

If you are diagnosed with biceps tendonitis, a range of treatment options are available. Nonsurgical interventions are the preferred first choice of chiropractors. Resting the shoulder and avoiding exacerbating activity may be suggested in combination with other strategies such as anti-inflammatory medication and ice packs to reduce pain and swelling. Any co-morbid conditions contributing to the inflammation will also need to be treated. In extreme cases, cortisone injections may be prescribed.

The most commonly employed surgical treatment for bicep tendonitis is acromioplasty, particularly in cases where shoulder impingement is also a problem. Acromioplasty is the removal of a small piece of the acromion (a bony protuberance of the shoulder blade), which gives more space between the head of the humerus and acromion itself, relieving pressure on the tendon and other soft tissues.

Biceps tenodesis is another surgical technique that may be utilized to treat tendonitis. In this surgery, the top of the biceps tendon is reattached to a new location. The technique has not, however, met with great success in treating tendonitis patients but may be necessary in cases where there is degeneration of the tendon or when extensive shoulder reconstruction is required.