Back to School and the Freshman 15: Stopping it Before it Starts 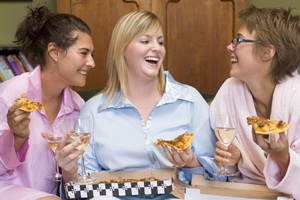 The theory behind the “Freshman 15” has been around for about 20 years. It’s the idea that students gain 15 pounds during their freshman year in college due to being away from home for the first time without parental supervision over what is eaten, free access to the college cafeteria and unlimited snacking potential. While this is not entirely true, it’s not entirely false either.

First of all, it’s more like the “Freshman 3” than the “Freshman 15.” A study conducted by researchers Jay Zagorsky at Ohio State University and Patricia Smith from the University of Michigan, Dearborn took a close look at the numbers. The investigators analyzed data from 7,418 teenagers who took part in the National Longitudinal Survey of Youth 1997 and were followed up on each year thereafter. They found that the average amount of weight gain during the freshman year in college was only 2.5 pounds for women and 3.5 pounds for men. In addition, 25 percent of college freshmen actually lost weight during that year. Only five to ten percent of freshmen gain 15 pounds. The weight gain also apparently had little to do with college. The young people who did not attend college also gained weight.

So what difference does college make? According to an Auburn University study, the average student gained 11.7 pounds over the course of four years. Even with dorm living that allows constant access to snacks, fast food and the all-you-can-eat college cafeteria, it did not make a large amount of difference in how much weight students gained. Those who gained the most weight were those who drank large amounts of alcohol.

Researchers Zagorsky and Smith discovered that young adults gained about a pound and a half per year, whether they were in college or not. Zagorsky noted, “College students don’t face an elevated risk of obesity because they gain a large amount of weight during their freshman year. Instead, they have moderate but steady weight gain throughout early adulthood. Anyone who gains 1.5 pounds every year will become obese over time, no matter their initial weight.”

For those going off to college, the important things to keep in mind in order to avoid gaining weight are basic rules that apply to everyone:

By keeping these few principles of healthy eating and exercise in mind, freshmen can get a positive start on their college years without worrying about their weight creeping up on them.