Are Vegetarians Really Any Healthier Than People Who Eat Meat? 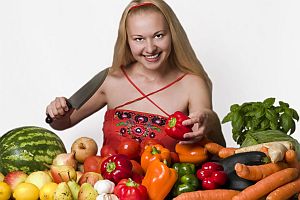 There are many different reasons why people may choose to become vegetarian, ranging from personal issues to ethical or environmental concerns. Some people stop eating meat for health reasons, and others just don’t like the way it tastes. For meat-eaters who are primarily interested in becoming vegetarian to improve their overall health, what does the science say? Are vegetarians really any healthier than people who eat meat?

The results of a recent study of over 70,000 Seventh Day Adventists published in JAMA Internal Medicine found that the male vegetarians in the group had a 12% lower risk of death from any cause than the meat eaters. Interestingly, the study found that a vegetarian diet did not seem to benefit women any more than a meat-based one, and there was no greater protection against cancer in either group. The researchers noted that vegetarians tend to exercise more, be thinner and smoke and drink less than those who eat meat. They naturally eat far more healthy fruits and vegetables than meat eaters, which provide plenty of disease-fighting vitamins, minerals and fiber.

Although eating less meat is a good idea for just about everyone, just removing all meat from your diet does not guarantee good health. Vegetarians must ensure that they are receiving sufficient amounts of the vitamins and minerals that are difficult to find in a non-meat diet, such as zinc, vitamin B12 and iron. Although iron can be found in vegetables as well, it is non-heme iron, a form that is not as easily absorbed as the heme iron in meat. You can technically be a vegetarian by eating a meal of French fries, a coke and a chocolate chip cookie, but that is not healthier than a meal consisting of a moderate amount of lean grass-fed beef, broccoli and a small glass of red wine.

In general, the meat itself is not the only issue when it comes to the health of meat-eaters. It is also the items that accompany it that tend to contribute to nutritional problems. Take, for instance, a hamburger. Most red meat comes from animals that have been raised on large factory farms where they are given hormones and antibiotics. That’s one unhealthy element of meat right there that can be eliminated by eating grass-fed organic meat, which must not receive any of these chemicals. Then that same burger is usually accompanied by highly processed and/or fried carbohydrates such as burger buns, mashed potatoes or chips, and a large sugary soda.

More current studies are finding that refined carbohydrates are causing the most chronic disease in our culture. Native cultures that have a high intake of fat and/or meat (such as the Masai and the Inuits) actually have lower rates of heart disease and diabetes than our culture, which eats less meat and saturated fat, but far more carbohydrates.

There is little doubt that eating less meat would be better for both our health and the health of the planet. But becoming vegetarian will not necessarily improve your health any more than eating a balanced diet with plenty of fruits and vegetables and eliminating refined carbohydrates.