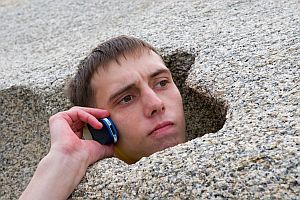 Although the term “addiction” is usually applied to ingested substances such as drugs or food, we can also become addicted to things and behaviors. The pleasure centers in our brain respond to anything that provides us with a reward, and smartphones are expert at providing those rewards. Although it is not “officially” classified as an addiction, many who use smartphones are increasingly showing signs of addictive habits.

An estimated 56% of all Americans now own a Smartphone. Videos, Twitter, Facebook updates and the occasional pleasant e-mail are all ways in which we become “attached” to our smartphones. Psychologist David Greenfield, PhD, who specializes in helping people deal with technology addiction, says that computer technologies can alter your mood and trigger feelings of pleasure. He notes “It’s like slot machines. We’re seeking that pleasurable hit.”

Although it seems a harmless enough addiction, excessive smartphone use can begin to interfere with your daily life. And this becomes a larger and larger risk as people use it more often in ways that cause them to “disconnect” from the real world around them while “staying connected” to the virtual one online.  Examples are easy to find:

Nicholas Carr, author of the book The Shallows: What the Internet is Doing to Our Brains, believes that smartphones are interfering with our brains in a way that reduces our ability to concentrate and think properly. He says, “It’s an environment of almost constant interruptions and distractions. The smartphone, more than any other gadget, steals from us the opportunity to maintain our attention, to engage in contemplation and reflection, or even to be alone with our thoughts.”

The reason for our smartphone addiction is likely tied to our primitive roots. For much of our evolutionary history, it has been very important for us to be aware of everything happening around us. Carr explains, “That instinct probably helped us survive when we were cavemen and cavewomen. I’m sure one of the main reasons people tend to be so compulsive in their use of smartphones is that they can’t stand the idea that there may be a new bit of information out there that they haven’t seen.”

In particularly “wired” societies—South Korea, where smartphone penetration is over 100%, is a great example—the issue of technology addiction among children is emerging as a national health problem. The South Korean government estimates that 1 in 5 students is now addicted to smartphone use.  They define “addiction” as spending 7 or more hours each day using the device and experiencing distinct signs of psychological withdrawal—anxiety, insomnia and depression—when forced to go without.  There is already compelling evidence that smartphone use is not only distracting students from their studies, it’s also damaging children’s interpersonal skills.  For instance, they’re becoming “very bad at reading facial expressions” as they spend more time texting and less time interacting face-to-face.